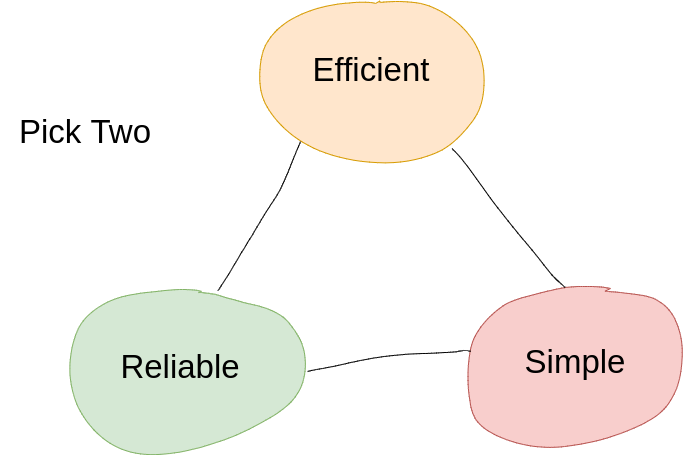 There is also the issue of optimizing for domains. Rust is fast when running on a native machine, but much slower and larger than Elm in the front-end. Thus it often makes sense to use different languages depending on the domain you are working in. Sometimes the domain dictates the language -- such as embedded microcontroller programming where often C/C++ is the only practical option. Some languages optimize one attribute aggressively at the expense of the other two. One example is Python -- it is very simple to use, but compared to other options is relatively unreliable and inefficient. However, when working on one-off data science problems, simplicity and ease of use is most important -- especially when paired with fast libraries. There is a huge difference between writing a program written by one person to solve one problem on one computer at one point in time (examples: data science calculations, excel macros, and university class assignments), and writing a program that will be developed by a team, deployed on many systems, and maintained over an extended period of time. In the first case (what I call one-off programs), it really does matter what you use. However, if we want a program to scale with developers, deployments, features, and time, then we need to think seriously about the programming triangle -- what is important for project success.

For programs that need to scale, we should be wary of languages that don't do any, or only one of these attributes well, such as Javascript on the backend. C++ is another example -- it is neither reliable or simple, but its momentum keeps it in high use, and sometimes the availability of libraries (such as Qt) make it a good choice.