The impact Git has had on our world is significant. This tool has enabled a level of collaboration that was not possible before and has changed how we work. There are several key reasons:

Git adds the following metadata to your source code, design files, and documentation:

This metadata is simple, but allows for powerful workflow processes.

Parts of a Git System

The block diagram below shows the various parts of a Git system. 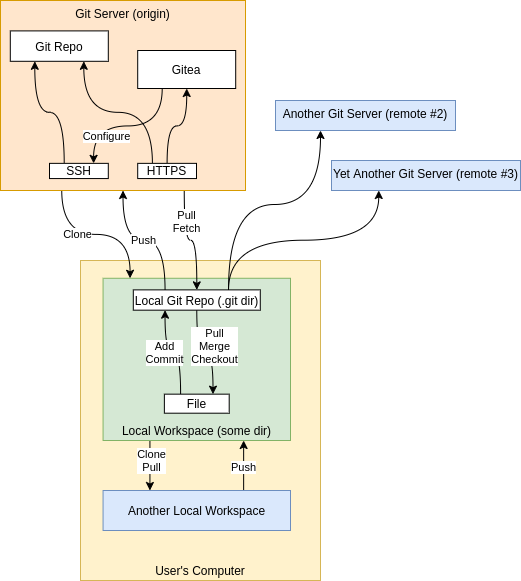 Typically there is a Git server and developers local workspace. But, there can also be additional remotes (shown in blue). While this may seem a bit complicated, it is very powerful and allows you to do flows like:

Git pull requests are central to effective collaboration (as mentioned before). The basic flow of a pull request is shown below.

Most Git hosting applications/providers offer an option to protect the master/main branch from direct commits. This encourages developers to work on branches and use pull requests to merge their work.

The following commands change the state of your local repo:

The following commands interact with remotes:

Another key concept of Git is branches. This is one thing Git does extremely well and really differentiates it from previous version control systems like Subversion. When you create a branch (git checkout -b <new branch> or git switch -C <new branch>), it exists in your local repo, but not in the remote. To push your branch from the local repo to the remote, you need to do something like:

The -u option tells git to connect your local branch with the remote so that on future pull/push operations, git knows which remote to synchronize the local branch to. Multiple remotes can exist, so Git needs to know which origin should be used.

If you are working on a branch, please merge origin/master before doing work. Otherwise, you may end up with a messy PR where tons of files are in the PR that did not really change. This makes things difficult to review.

Also, you should only commit the files you are working on changing. Again, if you commit everything that happens to be touched, this makes the PR hard to review. One flow is:

Now you may be left with some files that got changed by the process of doing work, but you don't want to commit. At this point (once everything is safely committed), do a:

This resets your workspace.

If you branch has not been worked on in awhile, it is cleanest to just reset it to the current master before doing work. Again, the goal is to minimize unnecessary merges:

Force push should be disabled on the master branch in your remote repos.

Again, the goal is to have commits/PRs that are easy to review.

If you only want to add a few of your commits to a PR, you can create a new branch, and then cherry-pick the few commits you want in the PR:

With Github, Gitlab, and Gitea, you can configure whether you receive email notifications on repository activity. This is done by clicking the watch or bell button on the repository home page. Different hosting services/applications offer different levels of watching, but if select the highest level, you will receive emails on commits to pull requests. You can protect the master/main branch so changes cannot be pushed to it. This forces all developers to work on branches and merge changes using pull requests (use the PR flow described above in the Working with branches section). It is important to create the PR before committing and changes to the branch. Then anyone watching the repo will receive email notifications for every commit.

Git is such a powerful tool that it even allows you to rewrite history -- well, at least in your Git repository. This is very handy as you can do work in your local repo, remove commits, merge commits, etc. This process can be used to clean up your commits before you push them to a remote. The following command can be used to:

What this command does is an interactive rebase of the last 10 commits. You can delete, merge, re-order, and edit various commits.

You can also throw away the last X commits.

This throws away any commits after <hash>. Be very careful with this as you can throw away useful work.

After your local commit history looks clean, you can then push it to the remote repo for review and merging.

Occasionally you may lose a commit. This may happen if you commit a change when you are not on any branch (common when using submodules). Git never throws anything away, so fortunately you can usually recover the commit by typing git reflog and then cherry-picking the lost commits after you switch to a branch.